Material Point Method (MPM) is a particle based method that represents the material as a collection of material points, and their deformations are determined by Newton’s laws of motion. The MPM is a hybrid Eulerian-Lagrangian approach, which uses moving material points and computational nodes on a background mesh. This approach is very effective particularly in the context of large deformations. 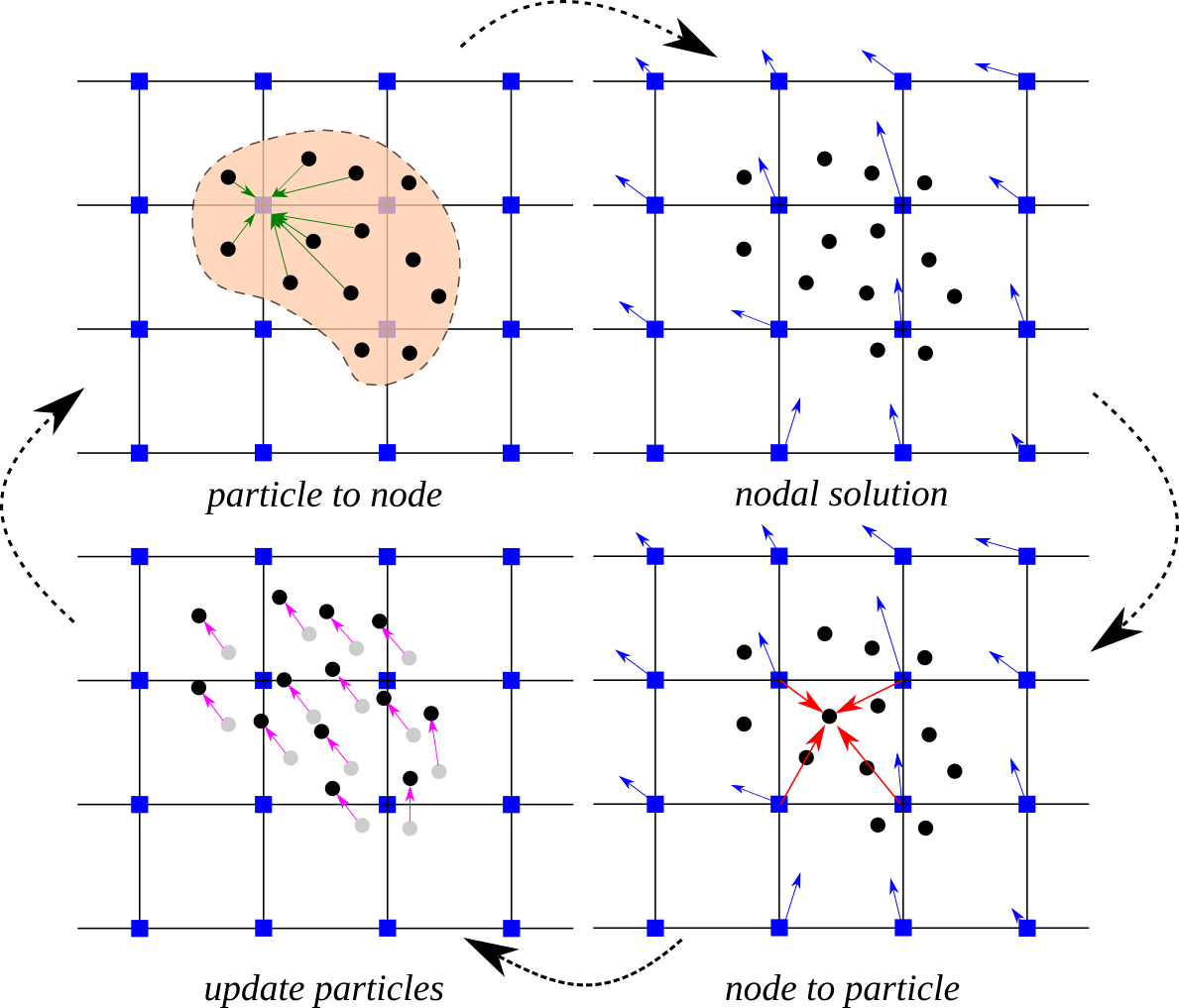 We develop a PyTorch-based Graph Network Simulator (GNS) that learns physics and predicts the flow behavior of particulate and fluid systems. GNS discretizes the domain with nodes representing a collection of material points and the links connecting the nodes representing the local interaction between particles or clusters of particles. The GNS learns the interaction laws through message passing on the graph. GNS has three components: (a) Encoder, which embeds particle information to a latent graph, the edges are learned functions; (b) Processor, which allows data propagation and computes the nodal interactions across steps; and (c) Decoder, which extracts the relevant dynamics (e.g., particle acceleration) from the graph. We introduce physics-inspired simple inductive biases, such as an inertial frame that allows learning algorithms to prioritize one solution (constant gravitational acceleration) over another, reducing learning time. The GNS implementation uses semi-implicit Euler integration to update the next state based on the predicted accelerations. GNS trained on trajectory data is generalizable to predict particle kinematics in complex boundary conditions not seen during training. The trained model accurately predicts within a 5% error of its associated material point method (MPM) simulation. The predictions are 5,000x faster than traditional MPM simulations (2.5 hours for MPM simulations versus 20 s for GNS simulation of granular flow). GNS surrogates are popular for solving optimization, control, critical-region prediction for in situ viz, and inverse-type problems. The GNS code is available under the open-source MIT license at https://github.com/geoelements/gns.

The performance evaluation of a potentially unstable slope involves two key components: the initiation of the slope failure and the post-failure runout. The Finite Element Method (FEM) excels at modeling the initiation of instability but quickly loses accuracy in modeling large-deformation problems due to mesh distortion. Hence, the FEM is unable to accurately model post-failure slope runout. Hybrid Eulerian-Lagrangian methods, such as the Material Point Method (MPM), offer a promising alternative for solving large-deformation problems, because particles can move freely across a background mesh, allowing for large deformation without computational issues. However, the use of moving material points in MPM for integration rather than the fixed Gauss points of the FEM reduces the accuracy of MPM in predicting stress distribution and thus failure initiation. We have created a hybrid method by initiating a failure simulation in FEM and subsequently transferring the coordinates, velocities, and stresses to MPM particles to model the runout behavior, combining the strength of both methods. We demonstrate the capability of the hybrid approach by simulating the collapse of a frictional granular column, comparing it to an empirical solution, and evaluating a suitable time to transfer from FEM to MPM by trialing multiple iterations with transfers at different stages of the collapse.

Visualizing regional-scale landslides is the key to conveying the threat of natural hazards to stakeholders and policymakers. Traditional visualization techniques are restricted to post-processing a limited subset of simulation data and are not scalable to rendering exascale models with billions of particles. In-situ visualization is a technique of rendering simulation data in real-time, i.e., rendering visuals in tandem while the simulation is running. In this study, we develop a scalable N:M interface architecture to visualize regional-scale landslides. We demonstrate the scalability of the architecture by simulating the long runout of the 2014 Oso landslide using the Material Point Method coupled with the Galaxy ray tracing engine rendering 4.2 million material points as spheres. In-situ visualization has an amortized runtime increase of 2\% compared to non-visualized simulations. The developed approach can achieve in-situ visualization of regional-scale landslides with billions of particles with minimal impact on the simulation process.

A new thixotropic model is developed integrating the Papanastasiou-Bingham model with thixotropy equations to simulate the flow behaviour of Tremie Concrete in the Material Point Method framework. The effect of thixotropy on the rheological behaviour of fresh concrete is investigated by comparing field measurements with numerical simulations. The comparison yields new insights into a critical and often overlooked behaviour of concrete. A parametric study is performed to understand the effect of model parameters and rest-time on the shear stress response of fresh concrete. The Material Point Method with the Papanastasiou-Bingham model reproduces slump-flow measurements observed in the field. The novel model revealed a decline in concrete workability during the Slump-flow test after a period of rest due to thixotropy, which the physical version of the test fails to capture. This reduction in workability significantly affects the flow behaviour and the effective use of fresh concrete in construction operation.